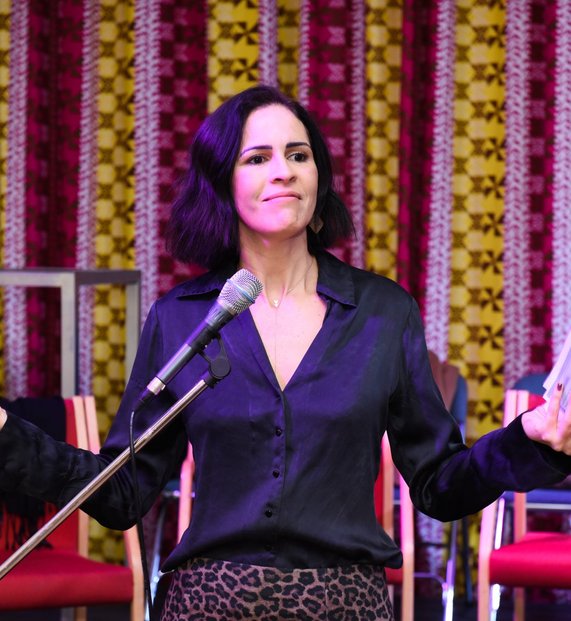 Woman Of The Week

This week #OssKvinner had the pleasure to interview Brazilian native, but Oslo-living businesswoman Larissa Slottet. We discussed the importance of holding on to your identity, while at the same time going through the process of integration into a new society. Larissa is in addition a brilliant business woman and she gave us her tips on how to stand out in Norwegian job marked.

Scroll down to continue reading!

You are originally from Brazil. Could you tell me a little bit about your background, and how you ended up working and living in Norway?

I am from Brasília, which is the capital of Brazil. The fact that I ended up working in Norway was a coincidence. I didn’t think of Norway at all when planning my future.

After I finished my bachelor’s degree in Brazil, I lived in Australia, and after that New Zealand. After living there for a while, I decided to go back to Brazil to finish my master’s degree and started working. I kept having this feeling that my spirit was unexplored, and I decided to leave Brazil again. My primary motivation for going abroad was actually to learn another language. After I learned English in Australia, and I decided to learn Spanish in Spain. I was based in Mallorca and worked for the yacht industry, but I had no visa to work in Spain. I met a Norwegian who told me that I could apply for a job and get a work-visa in Norway if I had high qualifications. I did that, got a job and a work visa, and that’s how I end up in Norway. It was quite a culture shock when I first got here, but of course, I got used to the differences.

A funny remark that I had repeated to myself my whole life, said as kind of a joke, “I am going to live in a country with a perfect system and no corruption,” and it ended up happening. I think that was how life subconsciously attracted me to Norway.

It has been important to you to hold on to your Brazilian identity, and not feel the pressure of having to “Norwegenize” yourself completely. Could you tell me why you think that is important?

My identity does not belong to where I was born or any country where I lived, either Norway. I am a mix of all my experiences. I have incorporated the characteristics of several cultures in my personality. So, I don't like to be put inside one of those boxes. I am concerned with the total understanding of humankind. I am a global citizen.

When I came to Norway, feeling the culture's closeness and joining a "norskkurs" I was trained to behave in the "Norwegian way." After a while, I thought that I was acting how everybody was expecting me to behave, but I felt like I was dying inside. That lead to me losing my energy, and I had feelings such as "I don't belong here" or "this is not my place". When one tries hard to fit in and become who is needed to be accepted, it's easy missing yourself.

After this understanding, I redeemed my true essence and understood that it was my mission to balance between "fitting in" and "belonging." When I accepted my differences and stopped feeling like I have to re-create myself, I started to feel like part of the total. Today I acknowledge my dissimilarities and I am happy with who I am. I know that no matter what happens, I belong to me, so I can belong to the society where I live. I belong where I am, no matter what.

I can be my authentic self and add new perspectives and visions in a homogeneous society without disrespecting or going against its norms and rules. This is my power. This is when my diversity becomes magic.

Do you think there is a need for a mutual learning-experience? For example: Norwegians need to be open to new people, and people coming from other countries to Norway have to, to some extent, try to adapt to a degree to the Norwegian society?

The perfect scenario would be that everybody opened their minds and understood that the world is not a homogenous place. The world is made up of different human beings, and there is beauty in that and plenty of opportunities for we learn from one another. Globalization is here, the future is global, we are all beings sharing the same planet, and we have to understand the differences between people, respect, and give value to that.

Norwegians born in Norway were here their entire lives. I was the one who came a little later. It is my obligation to adapt. It is me who has to do the job for my integration. Society as a whole has a long way to do in terms of embracing diversity, no doubt. But I cannot wait for Norwegian society to change their actions for me. So, knowing that in Norwegian culture, people tend to trust others that are more similar to them, I should find a way to prove the advantage of accepting someone with unique perspectives.

An essential factor in my integration process was when I assumed to myself that I am a Norwegian too. A Norwegian born in Brazil, who lived in many different countries, still, I am part of the Norwegian society. Once I changed this little key inside me, I included myself. The integration comes from inside. The responsibility of including me is mine.

As Verna Myers says, "diversity is being invited to the party; inclusion is being asked to dance." From my perspective, once I was accepted into the party by becoming a Norwegian, it is up to me to stand up and show my dance.

Do you have any advice for women here in Norway, sitting at home with great qualifications, but who do not get called for an interview, or who at this time is temporarily laid off, or looking for a job? How do you keep going?

First, one of the most straightforward advice I have is making an effort to learn the local language and acquire cross-cultural competence to function effectively in Norwegian society. Then, try to write your CV to the Norwegian market; you can go to courses or have advisors to adapt your CV and application. Third, you have to build a network and knock on doors. Meet people face to face and let them know how you believe you can contribute to their goals. Try to understand your industry, who are the players, and go there personally to introduce yourself. Last but not least, don't be afraid to ask for help. From my own experience, Norwegians love to help. They are not used to be asked, but I have never been ashamed to ask for help, and I have met fantastic Norwegian mentors along my way.

I want to add a piece of advice for the people behind the scene in hiring processes. Take risks, get out of the box, and give a chance to at least interview people with a different background than yours. I bet you will get surprised by the amount of talented and creative people who is available if you decide to give the chance to read the applications from people that have different names than you are used to.

Do you have any concluding remarks that you would like to end the interview with?

Like many other international people, I also experienced frustration along my journey for not feeling included. My wake up calls to myself back then, and to all of you facing the same thing is: Calm down and remind yourself that it was your choice to live in Norway, and you should be open to other ways of doing things when you live in a different culture. Stop judging and complaining. It's easy to judge. Much more difficult to understand. Understand requires compassion, patience, and willingness to adapt to the new reality. Through judging, we separate ourselves; through understanding, we grow together.